Live Stream - Tuesday May 18
Mediations on the Blessed Virgin Mary

Given the sad turn of events in recent days in Jerusalem, please circulate the attached press release from the Heads of Churches of Jerusalem to His Eminence, members of the Grand Magisterium, the Lieutenants and members of the Order. (click link in Red)

Reflections and Updates from the Holy Land A Miracle is Needed

that can be read by clicking HERE

Many thanks for your continued prayers.

A new edition of the Jerusalem Cross (April 2021, No 61) has been published and can be read by clicking HERE

The official annual magazine of the Order of the Holy Sepulchre is available online. This issue of Jerusalem Cross 2020-2021 sets out to cover a whole year through interviews, stories of the projects supported by the Order of the Holy Sepulchre and accounts of the activities carried out by the high offices of our Pontifical Institution.
Click HERE to read or to download.

Holy Land Stations of the Cross

As we near the end of Holy Week, The Equestrian Order of the Holy Sepulchre of Jerusalem invites you to walk the Via Dolorosa (Way of Suffering) with Father Peter Vasco, OFM, former Custos of The Holy Land and current President of the Franciscan Foundation for the Holy Land. Father Peter leads us on The Way of the Cross, stopping to pray at each of the stations marked in stone on the streets of the Old City of Jerusalem, the same path that Jesus walked, carrying his cross on the way to the crucifixion on Golgotha.

Our Lady of Palestine – Pray for him!

A Year with so Many Needs to Face

The January 2021 edition of the Jerusalem Cross has been published. Click HERE to open or download the PDF file.

A new Grand Master’s Corner posting offers thoughts on “what does it means for the Order be a Central Body of the Church?”  Cardinal Grand Master Fernando Filoni’s comments can be found by clicking HERE.

It is tradition that members our Order, when created Cardinal, receive through “motu proprio” of the Grand Master, the degree of Knight  Grand Cross of the Order of the Holy Sepulchre of Jerusalem.  The members of North America congratulate the Most Eminent Cardinal Wilton Daniel Gregory, Archbishop of Washington, for receiving this degree.  You can see the official announcement by clicking HERE.

An estimated 550 Knights, Dames and Clergy members joined us in the Advent Reflection Live Stream event on December 12.  Thanks to H.E. Margret Romano, Western Lieutenant, and members of the Western Lieutenancy for their assistance and participation.  Below is a recording of the Live stream including remarks by His Eminence, Cardinal Fernando Filoni.  A text copy of His Eminence’s reflection can be found by clicking HERE.

On October, 31, Sami El-Yousef, Chief Executive Officer of the Latin Patriarchate, provided nearly 300 Knights, Dames and Clergy members of the Order with a Holy Land update.  His report was very much appreciated.  We thank Sami for all his work and continue to offer our prayers and financial support to the peoples in the Latin Patriachate.

The meeting was recorded and you can watch by clicking the PLAY button in the video player below.  Click the bottom right corner to get a full screen view.

Cardinal Fernando Filoni, Grand Master, with all the Knights and Dames in the world, welcome the appointment of Msgr. Pierbattista Pizzaballa as the new Patriarch of Jerusalem and Grand Prior of the Order of the Holy Sepulchre.

The October issue of the Jerusalem Cross has been published.  Click HERE  to view.

Our Lady of Palestine Mass 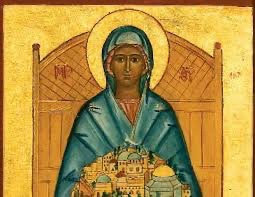 Each year, we celebrate the Feast Day of Our Lady Queen of Palestine, Patroness of the Order, the last Sunday in October.  This year, it will be October 25.

By clicking HERE you can download the liturgical aid in PDF format for celebrating the Solemnity of the Feast of Our Lady, Queen of Palestine mass.

Our Lady, Queen of Palestine, Pray for us and all the peoples of the Lands made sacred by your Son’s Life, Death, and Resurrection. Amen.

Msgr. Pizzaballa thanks the Order 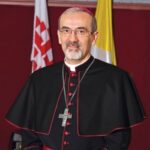 The Grand Magisterium reports on the success of the COIV-19 Humanitarian Relief Appeal in which nearly 2 million Euros was raised world wide with an addition 1 million Euro donated from other sources.  Click HERE to read the entire press release.

Reflections from the Holy Land - Sept 2020

“Reflections from the Holy Land Random Thoughts”  is a letter written by Sami El-Yousef,  CEO of the Latin Patriarchate.  He offers us a glimpse inside the current situation in the Holy Land as they confront the continued challenges of the COVID-19 pandemic.  He thanks all the Knights, Dames and Clergy for their generous response to the COVID-19 Humanitarian Support Appeal.  Click HERE to read Dr. El-Yousef’s letter in PDF format.

A new Grand Master’s Corner posting offers thoughts on “the vision regarding the place and role that Dames occupy in the Order?”  Cardinal Grand Master Fernando Filoni’s comments can be found by clicking HERE.

The North America Lieutenancies of the Equestrian Order of the Holy Sepulchre of Jerusalem join Lieutenancies around the world in a Humanitarian Support Appeal to assist the peoples of the Holy Land in their struggles coping with the COVID-19 pandemic.

The Latin Patriarchate has produced an Appeal Request document that provides great detail on the situation in the Holy Land and details the financial impact.  It can be seen HERE as a PDF file.

Click HERE to donate now through a secure payment process.

The July issue of the Jerusalem Cross has been published.  Click HERE  to view.

A new Grand Master’s Corner posting answers the question “How can we nourish a fraternal dialogue with people who do not profess our faith?”  Cardinal Grand Master Fernando Filoni’s comments can be found by clicking HERE.

May 2020 Issue of Jerusalem Cross 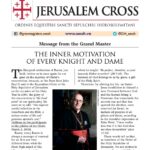 The May 2020 issue of the Jerusalem Cross (#57) has been published.  Click HERE to view

Read the latest answer by Cardinal Fernando Filoni in the “Grand Master’s Corner”. This month he comments about the young people and the Order of the Holy Sepulchre 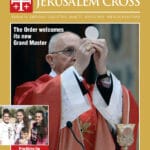 His Eminence Cardinal Fernando Filoni offers us this timely message in the final days of Lent as we prepare for Easter. 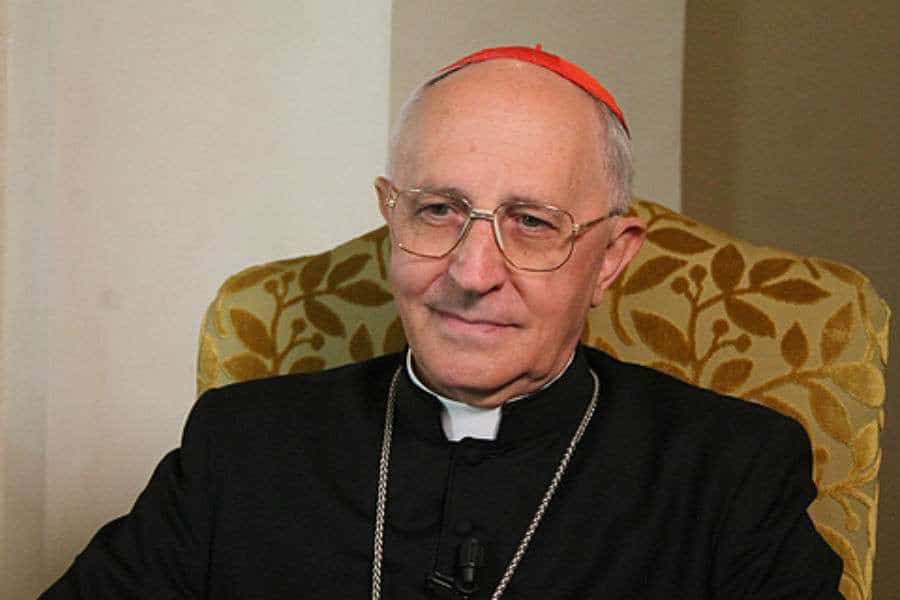 By decision of the Holy Father, His Eminence Cardinal Fernando Filoni has been appointed Grand Master of the Order of the Holy Sepulchre starting this December 8 2019, Solemnity of the Immaculate Conception. Published below is the official communiqué of His Eminence Cardinal Edwin O’Brien, Grand Master of the Order since 2012, who concludes his mandate a few months after reaching the age of 80.

“It is with complete acceptance and appreciation that I welcome the decision of Pope Francis to replace me as Grand Master of the Equestrian Order of the Holy Sepulchre of Jerusalem. I am especially pleased that His Holiness has appointed His Eminence Fernando Cardinal Filoni as my successor.

I have been privileged well beyond the time of my letter of resignation, submitted over five years ago. Throughout my more than eight years as Grand Master, my personal faith and love of our Church have deepened as I have witnessed our members’ commitment to the goals of our Order, expressed in different cultures and languages, all profoundly Catholic!
I am most grateful to the two Governors General with whom I have served, Their Excellencies, Professor Agostino Borromeo and Ambassador Leonardo Visconti di Modrone. Our collaborators in the Grand Magisterium and the daily, dedicated service of our office staff largely account for the steady growth of our Order. Their commitment to our lieutenancies and to the mission of the Latin Patriarchate has been unwavering.

Finally, I welcome His Eminence, Cardinal Filoni as Our Grand Master. His long and broad pastoral and administrative experience in service to the Universal Church will be precious assets as he leads our Order into the future. I offer him my full and fraternal support as I beg the continued intercession of Our Lady of Palestine.

Message from the Grand Master

On December 8 last, the Holy Father Pope Francis appointed me Grand Master of the Order of the Holy Sepulchre of Jerusalem. I was deeply moved on receiving this news.

Almost immediately, I was inundated by greetings and congratulations from the Grand Magisterium, and Lieutenants from around the world, from Knights, Dames and Clergy.

I would like to thank you all for the attention and consideration that you have shown me. I wish to express my particular gratitude to His Eminence Cardinal Edwin O’Brien, Grand Master emeritus; I think especially of his generous service, wise and competent leadership exercised over the course of these years.

As I extend to you all my first greeting, dear Members of the Order, I would also like to wish each and every one a very Merry Christmas: May it be a privileged moment of reflection on our encounter with the divine humanity of Jesus who appeared in Bethlehem, and allow ourselves once again to share in the amazement of the Wise Men and the Shepherds. Bethlehem and Jerusalem are the two poles that enclose the mystery of our faith. 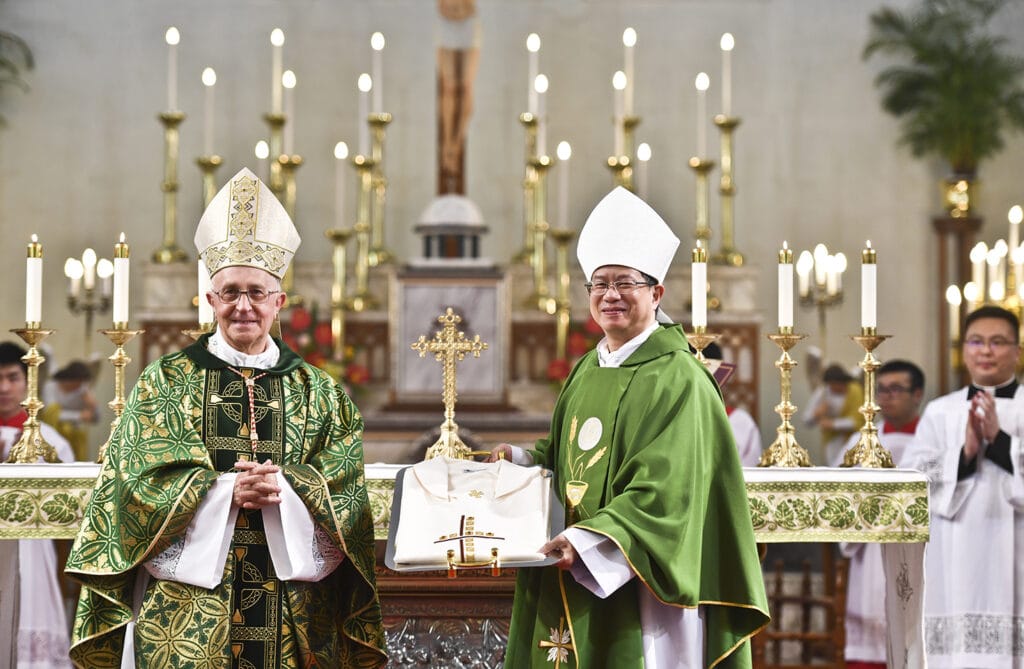 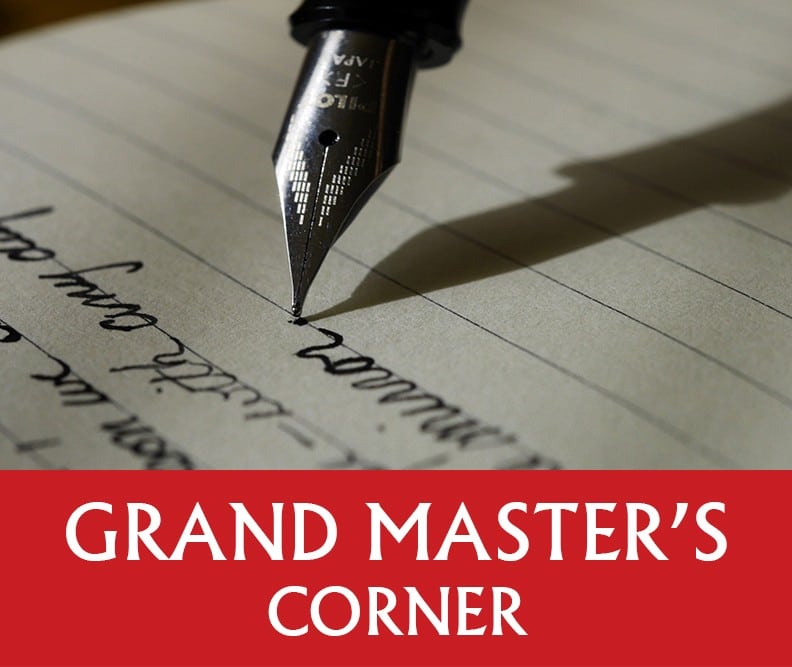 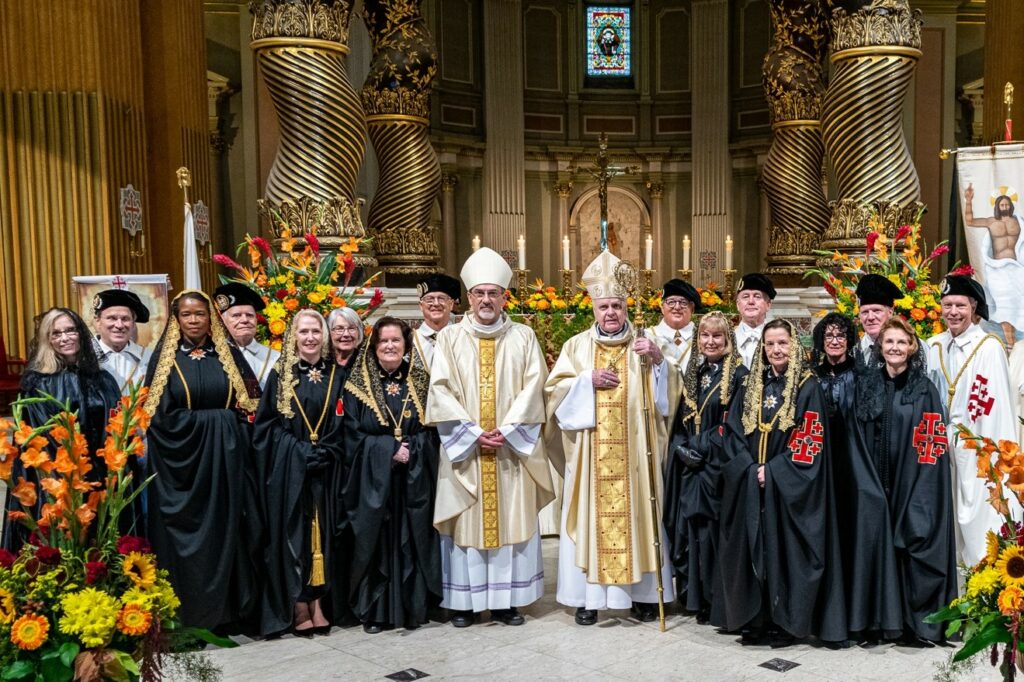 For the first time in history, the five Canadian Lieutenancies of the Equestrian Order of the Holy Sepulchre of Jerusalem gathered in Montreal on Sunday September 29, 2019 for a National Investiture. On this occasion 36 Knights and Dames were invested. The ceremony was presided by His Eminence Edwin Cardinal O’Brien, Grand Master of the Order at the Cathedral Basilica of Mary Queen of the World.

Also present: our Pro-Grand Prior, His Excellency Most Reverend Pierbattista Pizzaballa, Titular Archbishop of Verbe and Apostolic Administrator of the Latin Patriarchate of Jerusalem.

The Vice Governor General for North America, H.E. Thomas Pogge was pleased with the success of this event and warmly thanked the organizers of the Canada-Montreal Lieutenancy. Which attracted more than 180 Knights and Dames, Lieutenants and Priors, Bishops, members and many Lieutenants from the United States.

The kick-off event for the Investiture weekend was a Benefit-Concert which took place on Friday evening, September 27, 2019.  The profits will be donated to the works of the Latin Patriarchate of Jerusalem. This concert of sacred songs featured internationally renowned Canadian soprano Natalie Choquette.

On Saturday, September 28,  the Promotions and Vigil ceremony took place at Saint Joseph’s Oratory, the largest shrine dedicated to Saint Joseph in the world founded by the Canadian Saint Brother André. It was at this ceremony that future investees were able to pray more deeply about the meaning of their promise and commitment to support our mother Church in the Holy Land. This was followed by a conference given by H.E. Msgr Pizzaballa on the status of the Christians in the Holy Land and the daily challenges facing them.

On Sunday morning, September 29, the Vice Governor General for North America, H.E. Sir Thomas Pogge, presented the projects of the Order in the Holy Land, and spoke of the future prospects and projects for all the Lieutenancies of Canada and the United States and how the main focus of the Order should be to support education in the schools of the LPJ as well as pastoral projects.

The Lieutenants of Canada as well as the members of the organizing committee of the Canada-Montreal Lieutenancy were very pleased with the success of this great Canadian première.

Pictured in the photo are: (left to right)